It’s nearing the end of August! We have a busy few weeks coming up.  Aaron’s band has a bunch of shows and then Sam starts preschool and then we’re having a joint birthday party for the boys.  The party is going to be farm themed because they boys love tractors.  I have grand pinteresty plans so we’ll see how that plays out.

I’ve made a couple things on the sewing machine lately.  My sewing room is a huge mess.  I need to come up with a pattern organization system because my current system involves throwing them in piles all over the floor.  And my sewing room is a spacious 8×10.

I feel redundant posting pictures of the things I’ve made lately because I think a lot of people that read this blog also follow me on Instagram and I’ve already posted pics there.  If you don’t follow me on instagram, you can! I’m pam_foxandcotton.  I’ve really been into the Instagram “stories” lately.  I just wish more people would post them because I like watching them.  I’ve also read that some people don’t have Stories on Instagram yet.  Is this true?

Here are some pics of lately:

We took the T to the Pirate’s game a few weeks ago.  It was fun! and HOT.  We stayed through the 7th inning and Tucker completely skipped his nap that day.

We took away Tucker’s pacifier.  We started talking about taking it away around his second birthday which is the end of September.  And then one day Aaron was putting him to bed and Tucker didn’t ask for one so Aaron didn’t give him one…and that was the end of that.  It was way easier than I expected.

I tried to take a picture of the boys with balloons for their birthday party invitation but they all pretty much turned out like the ones below. fail.

I’m going to a baby shower this weekend and I’m making the cupcakes.  I made little fondant toppers for them which kind of made me want to make decorated cookies again.  Not enough to actually do it, but I thought about it for a minute.

I made these little baby pants using this free pattern.  They are really quick and use the tiniest amount of fabric.  I did the whole thing on my serger.  No top stitching or pinning required. 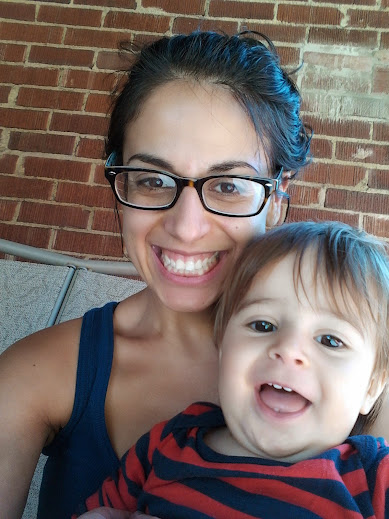